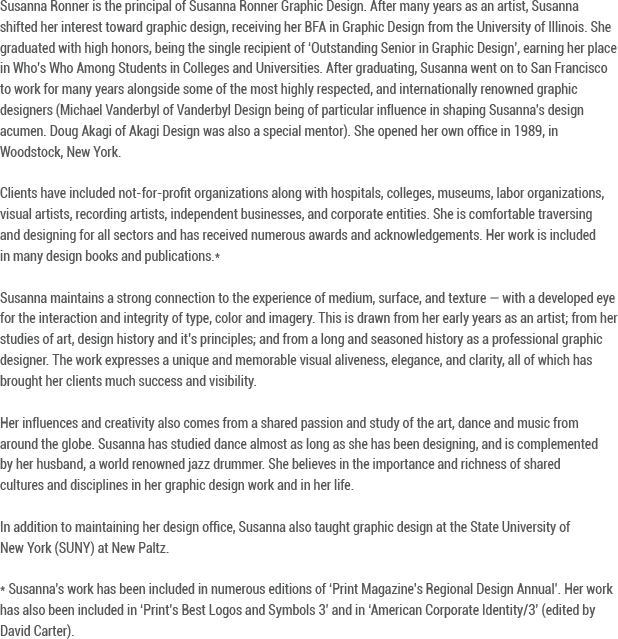 Susanna  Ronner is the principal of Susanna Ronner Graphic Design. After many years as an artist, Susanna shifted her interest toward graphic design, receiving her BFA in Graphic Design from the University of Illinois. She graduated with high honors, being the single recipient of ‘Outstanding Senior in Graphic Design’, earning her place in Who’s Who Among Students in Colleges and Universities. After graduating, Susanna went on to San Francisco to work for many years alongside some of the most highly respected, and internationally renowned graphic designers (Michael Vanderbyl of Vanderbyl Design being of particular influence in shaping Susanna’s design acumen. Doug Akagi of Akagi Design was also a special mentor). She opened her own office in 1989, in Woodstock, New York.

Susanna’s clients have included not-for-profit organizations along with hospitals, colleges, museums, labor organizations, visual artists, recording artists, independent businesses, and corporate entities. She is comfortable traversing and designing for all sectors and has received numerous awards and acknowledgements. Her work is included in many design books and publications.*

Susanna maintains a strong connection to the experience of medium, surface, and texture — with a developed eye for the interaction and integrity of type, color and imagery. This is drawn from her early years as an artist; from her studies of art, design history and it’s principles; and from a long and seasoned history as a professional graphic designer. Her work expresses a unique and memorable visual aliveness, elegance, and clarity, all of which has brought her clients much success and visibility.

Susanna’s influences and creativity also comes from her shared passion and study of the art, dance and music from around the globe. She has studied dance almost as long as she has been designing, and is complemented by her husband, a world renowned jazz drummer. Susanna believes in the importance and richness of shared cultures and disciplines in her graphic design work and in her life.

In addition to maintaining her design office, Susanna also taught graphic design at the State University of New York (SUNY) at New Paltz .

* Susanna’s work has been included in numerous editions of ‘Print Magazine’s Regional Design Annual’. Her work has also been included in ‘Print’s Best Logos and Symbols 3’ and in ‘American Corporate Identity/3’ (edited by David Carter).